The territory along A-1702 could not be understood without the “masadas” (farmhouses) and the “masoveros” (farmers): self-sufficient, solitary, imaginative. The masadas are a way of life that today is almost lost; it was kept alive for centuries it has conditioned the social structure, the configuration of mentalities and the environment.

A-1702 divides into two parts the Interpretation Space of the Masías Territory of Ejulve which allows us to know the scattered habitat and way of life of the farmhouses, a natural, cultural and historical heritage of great value, through old marked footpaths that run through a significant number of masadas in an especially interesting territory also from the natural and landscape viewpoint.

The note: Life in the “masías” 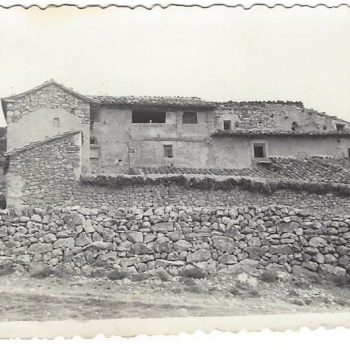 “The fire burned for the entire day in the kitchen fireplace. But we hurriedly dined around the table in the centre to go back in the circle next to the fire. Grandfather Manuel enjoyed throwing abundant juniper branches on the fire and the momentary flares would make you back up somewhat (… ) Around the fire, incessantly fed, the women knitted or did other needlework. Others of us cut cabbages until filling some baskets and the next day they were given to the lambs. At times, my father made esparto rope or mended an implement (….) When there was a good number of embers in the fireplace, sometimes we would roast apples or we would make Rock tea sweetened with honey or sugar. I used to read by the light of the carbide lamp and the flames of the fire (…) The evening was prolonged in the warmth of the fire and family conversation. One now, another one later, we marched off to the bedroom. I used to linger until the end, as I was in no hurry to get into such cold sheets, and although some time had passed since I added wood to the fire, I stayed on, stirring the abundant embers that remained among the ashes. Finally, I had to take an oil lamp and go to bed. Getting into it was somewhat heroic”

A rugged landscape, with hostile surface appearance but of exceptional beauty. One of these ravines is of Cueva Muñoz (Muñoz Cave), in back of Órganos de Montoro. A rugged landscape, with innumerable attractions such as fountains, thick forests, several observation points, singular trees, a sickle with active cascade at times of heavy rain, and the presence of the indigenous crayfish, cliff-nesting birds of prey and mountain goat, in addition to the hermit’s cave, inhabited according to lore by “a giant” who was not a giant, but instead, a person of great height known as “the giant of Muñoz Cave”, who made his living from barter. Inside the cave, it is still possible to see remains of the rough bed, of the walls, of the bread oven, etc. The cave can be reached by a simple, well defined and marked footpath, a little more than 2 kilometres long, suitable to walk with the family and with spectacular panoramic views.

A spectacular balcony on THE SILENT ROUTE at the level of Órganos de Montoro, and at their highest point. The observation point is accessed from the Masías of Ejulve on a trail in good condition. From there, we can enjoy some magnificent views over Las Hoces del Guadalope, Montoro de Mezquita and the straits of Boca del Infierno.

At around kilometre 17.300 of A-1702, the highest point from Ejulve before starting the descent to Órganos de Montoro on Barranco de los Degollados, it is worthwhile to stop and view the “Sky line” of the Alto Maestrazgo in all its splendour.

From there, we can discern the great furrow opened in the mountains by the Guadalope River and we can make out from right to left, the heights of Coronas de Aliaga, marking the horizon on the south, the top part of Pitarque with its Peñarrubia, and behind the elevation of Fortanete, the heights of Cañada de Benatanduz and Las Muelas de Villarluego and Cantavieja. An enormous tableau of mountains, hills, clouds, forests and masadas (farms) that on winter mornings, is completed with the fields of mist that ascends from the valleys, marking them like trails.

A solitary pine marks the point where the best panoramic view can be obtained. The fire that devastated the rich green blanket opened an extraordinary window for us to view the territory that is covered by THE SILENT ROUTE. 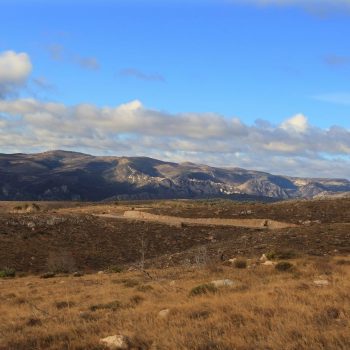 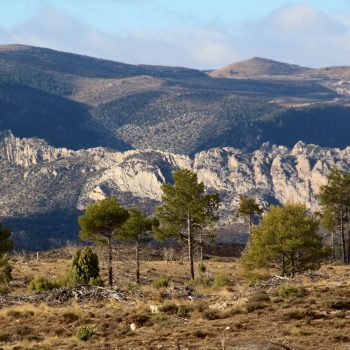