The district of Maestrazgo presents ‘El Caimán’ at The Silent Route

The Silent Route has a new tourist attraction, ‘El Caimán’, a place where you can stop to take a photo and get to know a piece of the history of the A-1702 road and the Maestrazgo.

“This is a new rest area at kilometre 50 of The Silent Route, where you can find a reproduction of the old bus that used to travel along the A-1702 road and was called ‘El Caimán’ by the people of these villages,” says the president of the district of Maestrazgo, Roberto Rabaza.  This bus used to travel, and still travels, from Monday to Friday, the A-1702, leaving from Cantavieja and ending in Alcorisa. The Caimán bus has been inextricably linked to the road and the villages it has travelled through for around 100 years.

Precisely in 1922, just 100 years ago, the teacher, journalist and writer Melchora Herrero travelled to her birthplace, Villarluengo, to attend the commemoration of the 400th anniversary of the discovery of the Virgin of Montesanto. Herrero describes her experiences of those days in a book and talks about the road that had just been opened to Villarluengo: “which has to be extended through La Cañada de Benatanduz to Cantavieja”.

Thanks to a brief news item in the newspaper ‘La Voz de Teruel’, dated 30 July 1930, we know that at this time a bus line was running along this road, and, later, in the newspaper ‘La Acción’ of 9 August 1935, a note refers to the difficult access to Montoro de Mezquita, stating that: “After several years of struggle, from the 1st of the current month the villages of this district have an important improvement, which is the daily auto-correo service from Venta de la Pintada to Cantavieja, passing two kilometres from this locality”.

The best known episode experienced by this bus was the assault by the Maquis who, organised in the Guerrilla Grouping of Levante and Aragon, had the Maestrazgo as their axis of action. It took place in February 1948, on the slope of ‘Los Degollaos’ between Ejulve and Montoro, resulting in a shootout with the Civil Guard couple who, as they did every day, were camouflaged among the passengers.

In the 1960s the mail coach service was run by Francisco Balfagón Monserrate. The bus was green, with a lizard on the front, which is why it is said that it was called ‘El Caimán’. In 1963, Delfín Altaba Ferrer, who was already running other services in the area, bought the mail and passenger transport service between Alcorisa and Cantavieja from Francisco Balfagón and the Chevrolet bus, registration number CS-2933, which is the one that has been reproduced here.

The Cantavieja – Alcorisa line is still running, every day from Monday to Friday. It leaves Cantavieja at 6:30am and arrives in Alcorisa at 9:15am. The return journey starts at 14h, arriving in Cantavieja at 16:40h. It travels through Cañada de Benatanduz, Villarluengo, Pitarque, Ejulve, Molinos and Berge, and enters Montoro de Mezquita on Tuesdays and Fridays. The service is still run by the Altaba company and the bus is still called ‘El Caimán’ in memory of the original vehicle.

In those years the service was not to go and return on the same day as today, but they went one day and returned the next. They carried all kinds of orders, sacks, letters from the post office, money for collections, etc. They were always full of people, even if they didn’t fit inside, they would get on the roof of the bus, and if it was going uphill they would get off and push.

“The rest area has been equipped with a parking area, an interpretative panel telling the history of the road and the bus, and different rest and beautification furniture: picnic tables, benches, planters, and, at the entrance to the area, an old disused lamp post has been used to place directional arrows indicating the distance to other scenic roads in the world,” says Rabaza.

In order to carry out this action, the district of Maestrazgo has received a grant of 14,000 euros from the Teruel Investment Fund (FITE) for the year 2020.

This action complements the other actions and activities that the districts of Maestrazgo and Andorra Sierra de Arcos are carrying out to revitalise this shared road that has turned out to be a mecca for motorbike and ‘slowdriving’ enthusiasts. 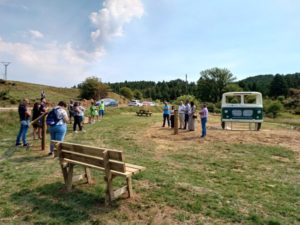